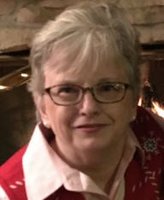 Mary C. Ellicson (nee Anderson) age 60 of Hainesville passed away suddenly on January 1, 2020 and grew up in Des Plaines. Mary is survived by her loving husband Roger Ellicson and married for 36 years. Mary is proceeded death by the late Elmer and Kathleen (Brennan) Anderson and four siblings the Therese (Terry), John, Bill and Mike Anderson. She is survived by two brothers: Joseph Anderson (Gavin Duffy), Martin Anderson (Tina), sister-in-laws Debbie Jurs, Sharon Ellicson, Mary Lou Anderson and Sandra Martins. She is also survived by 11 nieces and nephews and 7 great nieces and nephews. Mary had a great love of family and friends. She cherished family get together and was often the glue that held the family together. Mary had a number of employments of the years, but the one she was most passioned about was CASA. She had a tremendous love for children and it was her desire that every child had a safe and loving family environment. Mary had a love for reading, politics, the Chicago White Sox and her Irish heritage. Visitation arrangements are on Sunday, January 5th from 2:00pm-8:00pm at McMurrough Funeral Chapel, 101 Park Pl (Rt 176, 1 Blk E of Rt 21) Libertyville. Mass of Resurrection will be held on Monday, January 6th at 10:30am St. Joseph Roman Catholic Church, 121 E Maple Ave, Libertyville. Interment immediately following at Ascension Catholic Cemetery in Libertyville. In lieu of flowers, donations may be made to: CASA Lake County, 700 Forest Edge Drive Vernon Hills, IL 60061. Funeral info (847) 362-2626. Please sign the guestbook at libertyvillefuneralhome.com