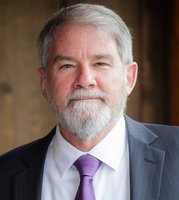 Thomas F. Lowry III, 67, of Mundelein, IL passed into eternal life on January 1, 2020 after living with brain cancer for two years. He was born on July 4, 1952, raised in Glenwood, IL and attended Homewood-Flossmoor High School (class of ‘70), the University of Illinois - Urbana Champaign (class of ‘74 and Law ‘77), and DePaul University (LLM) . Tom Lowry was an awesome guy. Quiet, with a quick wit and an incredible memory for facts and trivia, he was a tax attorney by trade, but his true passion was for his family, his friends, for gardening, for good music, and for sharing conversation over a cold beer. He was married to his wife Laurie for 36 wonderful years, and together they had four daughters: Kristin, Kate, Kelly, and Karen. Becoming a father was the highlight of Tom’s life; and being a dad became the center of his life, expanding his world and bringing him so much happiness. Tom had two grandchildren, Cora and Flynn whom he loved with his whole heart. Tom watched Cora the first whole year of her life ("Grandpa's daycare"), and was the sole witness of her very first steps. Flynn, his grandson, is just like his grandpa in so many ways. Tom surpassed the length-of-survival odds of his diagnosis and not only was around when Flynn was born, but was able to watch him grow and develop into a sweet toddler. Tom was genuinely interested in the lives of those around him, and could chat easily with anyone. He loved his Scots-Irish heritage, and traveled to Ireland several times to enjoy the music and history of his ancestors. A few years before he passed away, he proudly obtained his Irish citizenship. When he was diagnosed with GBM in December of 2017, he faced his illness with quiet courage. He never complained, nor did he give up, and he surpassed all odds given to him. During his final days, he was surrounded by love, his family constantly buzzing around keeping him comfortable and sharing final conversations and memories. Tom chose a quiet moment in the early hours of January 1st, 2020, to take his last breath. His brother Craig was by his side and they were listening to some great tunes. Tom is survived by his wife Laurel (nee Rieboldt) of 36 years, daughters Kristin (Tim) Cochrane, and Kathryn, Kelly and Karen Lowry, grandchildren Cora and Flynn Cochrane, his brothers Craig (Leslie) and Robert (Connie) Lowry, his sister Patricia Crofoot, brothers-in-law Ron (Jean) Rieboldt and Brick Mason, mother-in-law Shirley Masters, and his nieces and nephews. He was preceded in death by his parents Thomas and Joyce (nee Rodgers) Lowry and sister Nena Lowry Mason. Funeral services will be at 3:00pm Tuesday Jan. 7th at McMurrough Funeral Chapel, 101 Park Pl, Libertyville, IL. with visitation from 12:00pm until time of service. If desired, memorial donations made to BrainUp https://www.brainup.ngo/sunflower-wall/tom-lowry/, would be appreciated.