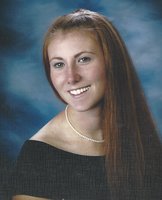 On Thursday 9 April 2020 Shannon Elizabeth Morrow passed away in Chicago at the age of 33. Shannon was born on 10 September 1986 in Oceanside California to John and Mary Morrow. She spent her formative years at Camp Pendleton CA, Fenton MI, Poquoson VA, Vernon Hills and Libertyville IL. Shannon was a graduate of Carmel H.S. and received her BA from James Madison University in Virginia in 2009. While at JMU she joined Delta Gamma Sorority and became chapter President in her junior/senior year. After college Shannon remained very active with DG by joining Chicago Alumnae activities, mentoring the DG chapter at Lake Forest College and serving on the DG Region 5 team as a college housing specialist. In line with Shannon’s selfless and giving spirit, a Delta Gamma scholarship is being initiated in her name. Shannon worked as an office manager for an Academic Tutoring Center for 10 years. She had a passion for travel, visiting Europe and ancestral Ireland as well as family on the east coast and her brothers wherever they were stationed. Shannon is survived by her parents, LtCol and Mrs John Morrow USMC Ret, her brother Maj Thomas Morrow USMC his wife Kaity and their children Lucy and Owen; her brother Capt Sean Morrow USMC his wife Alexandria and their son Lucas; several aunts uncles and cousins in Connecticut and Ireland; countless friends and sorority sisters across the US. Services will be conducted at a later date. Information relative to the DG Scholarship Fund can be found at: http://donate.deltagamma.org/shannonmorrow