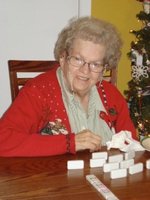 Theresa (Tess) Ellen Woyach was born in Chicago, IL on September 20, 1925. The daughter of Alfred L Mennell and Lydia H Lyford. She attended various grade schools on the Northside of Chicago and graduated from Norman Bridge in 1938 and Charles P Steinmetz High School in January 1944. Among her classmates was Hugh Hefner the founder of Playboy Magazine. She was a toll typist for Illinois Bell during World War II and left when she married. In 1943 she met Herbert W Woyach of Melrose Park, IL; he introduced her to Italian foods and she continued to eat sausage and spaghetti the rest of her life. She married him on February 1, 1947 at Martin Luther Evangelical Lutheran church in Chicago and they subsequently moved to their farm at 176402 Coral East Road in Union,IL for the next 46 years. Together they had 5 children; Wayne P, Roxanne L, Larry A, Herbert W Jr. and Robert. Tess was a member of various organizations and volunteered extensively her entire life including the Parent-Teacher Association (PTA) for 31 years, Election Judge for Coral Township, 4-H club for 25 years, McHenry County Historical Society for 20 years, Women's Club of Marengo for 15 years, MCHS Band Parents, Summer with the Arts and Marengo Boosters. She was an avid needle-worker knitting, crochet, embroidery and cross stitch; her dislike for sewing was underestimated as she sewed the hems together of a skirt she was making for home economics in high school. Two of Tess's favorites were Hallmark Christmas ornaments and Fannie May candies, and they owe their survival to her. She attended St. John's United Church of Christ in Union, IL from 1952 until 2004; a member of the Women's Circle and Altar guild. She sang in the choir for most of that time. After the death of Herbert W in 1990 she remained on the farm until 1993 when she moved to Marengo, IL where she remained until 2004. She worked for Wisted's supermarket in the deli department for almost five years during that time. In 2004, she decided to live at Spring Meadows Independent living center in Libertyville, IL until 2018. During this time she became a member of the United Methodist church; joining the choir and Priscilla's Circle. Lastly, due to a fall in 2018 she moved to Libertyville Manor nursing home until the time of her death. She is survived by her daughter, Roxanne (David) Hasse of North Richland Hills, TX. Larry (Kelly) Marengo, IL. Herbert Jr. of Phoenix, AZ and Bob of Dallas, TX. Her brother, Dr. James Mennell of Slippery Rock, PA. 7 grandchildren, Laura, Tom, Betsy Woyach, Amanda Hasse and Stacy Hasse Miles, Paige Greves and Jenna Leuth. 2 great grandsons, Carter and Finn and many nieces and nephews. She is preceded in death by her parents, eldest son Wayne, husband Herbert, and her sister Frances Froehlich. Visitation will be held at McMurrough Funeral Chapel, 101 Park Pl, Libertyville, IL on Saturday June 13, 2020 from 2:00 – 4:00 pm with burial on Sunday June 14 at Harmony Cemetery, in Marengo, IL. Please sign the register book at Libertyvillefuneralhome.com