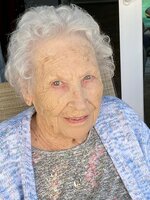 Claire McMasters long-time Libertyville resident died at Joanne’s House, Hope Hospice in Bonita Springs, FL on Monday, November 09, 2021, with her loved ones at her side. Claire was born in Keokuk, Iowa. January 8, 1926 to Paul and Elizabeth Meredith. She graduated from St Mary’s High School in 1944. After WW2 Claire married her high school sweetheart Warren A McMasters, October 12, 1946 in Keokuk. They celebrated 64 years of marriage until the death of her beloved husband. Claire had strong ties to Keokuk all her life. She loved going to her high school reunions and attended her 75th! Claire was an avid genealogist, she documented all the history of her family as well as the McMasters family. She loved to travel, if the car was going, she wanted to be in it. She loved traveling to all the National Parks. Her greatest love was her FAMILY.

The family asks if you would like to donate in Claire’s honor that you donate to Hope Healthcare (Hospice), Joanne’s House in Bonita Springs where she received such wonderful care. HopeHCS.org There will be a memorial in the spring in Libertyville and Claire and Warren will be reunited at Ascension Cemetery. Funeral arrangements by McMurrough Funeral Chapel (847) 362-2626. Please sign the guestbook at libertyvillefuneralhome.com