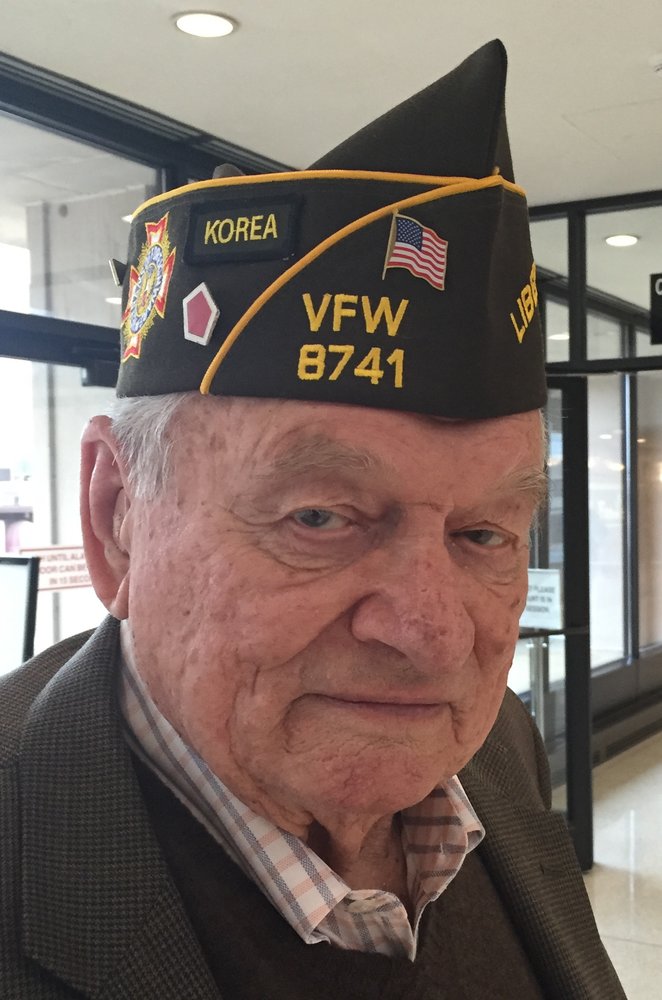 Anton “Tony” Boeckholt, 87 of Libertyville, passed away Oct. 20, 2019. Tony was born in Titonka, Iowa where he grew up on a family farm and loved to go back and help out.

Tony served with the US Army in Korea as a member of the renowned 555th regimental combat team, fondly known as “The Triple Nickel”. In Korea, Tony was a gunnery sergeant on 155 mm Howitzer cannon in active combat. He maintained close friendships with the men he served with until the day he died. He also developed new friendships upon visiting the war memorials during the Honor Flight visit to Washington DC this spring. Tony enjoyed visiting local schools with other veterans and educating children on US history and the role of veterans.

Following his tour of duty, Tony briefly farmed in Iowa and moved to Libertyville where he got a job working for The North Shore Railroad through his uncle. While working in Libertyville he met a very dynamic executive secretary named Donna Mae Obenauf. After meeting Donna, Tony decided Libertyville was a good place to put down roots and married Donna Mae at St. Joseph’s in 1960. His love of woodworking took him to Libertyville Lumber Co where he served as manager for twenty years. He later purchased his own lumber company, Long Lake Lumber with his wife Donna Mae. They ran this together until they retired in 1996. Tony loved woodworking, fishing, camping, writing poetry, painting and helping others with outdoor projects.

Tony and Donna travelled the world to over 25 countries. He enjoyed reminiscing about his travels with visitors to his home. In later years he enjoyed cross country camping excursions with his friends and wintering in Arizona.

Tony was actively involved in St. Joseph’s Church, the Carmel High School community, served as Assistant Scout Master and volunteered at many other town functions. He was an active member of St. Joseph parish and member of Libertyville VFW Post 8741.

He is survived by his children Amy (Mike Hazelton) Boeckholt and Ashley (Melinda) Boeckholt and his sisters Harriett Kurtzleben, Nancy (Richard) McGuire, and his sister-in-law Rachel Boeckholt as well as many beloved cousins, nieces and nephews. Tony was preceded in death by his wife Donna Mae of 40 years, his brother David Boeckholt and son-in-law Dan Wilt.

To send flowers to the family or plant a tree in memory of Anton Boeckholt, please visit Tribute Store
Friday
25
October