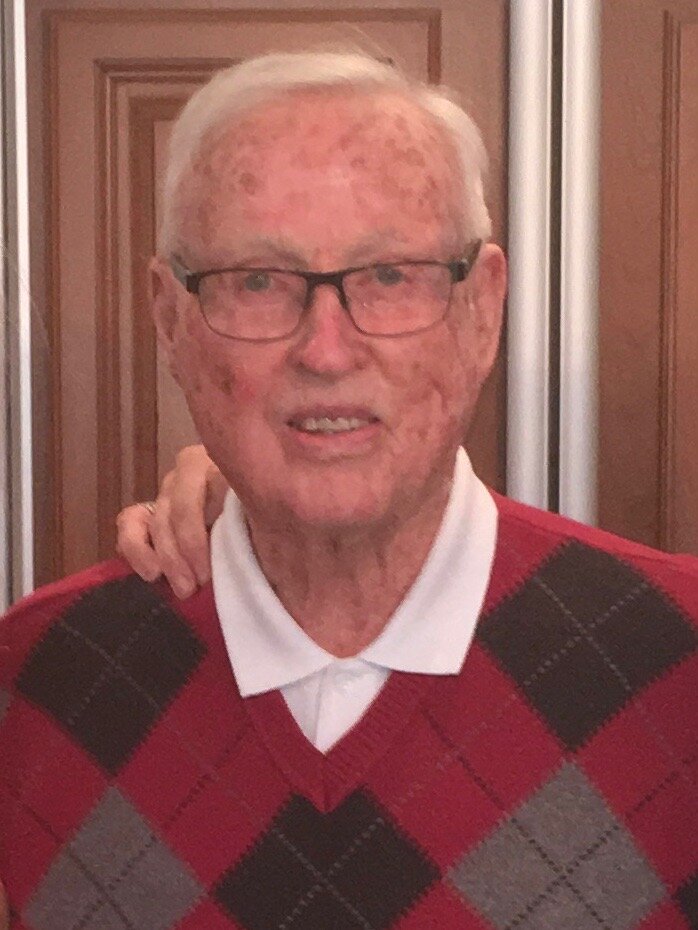 After his high school graduation, Jack joined the Army at the University of Illinois and was eventually based at the Pentagon after World War II ended. His service continued in his role as messenger for then General Dwight Eisenhower, working between his base at the Pentagon, the White House, and Congress.

Jack went on to earn his Bachelor’s degree in Pharmacy from the University of Colorado in Boulder. At mass one day after graduation, he spotted a beautiful young Dorothy Detig returning from Communion, and asked his brother, Bill, who she was. She didn’t stand a chance. They married on June 25, 1955, at St. Patrick's Church in Rochelle.

He then embarked on a successful career that began at Abbott and ended in the international fur industry—successful because his colleagues and customers were friends who became family. When he turned 90, they threw a surprise party for “legendary” Jack Brennan, as the invitation read. Retired from his full-time role 30 years ago, he still worked part-time until recently. The saying “Love what you do, and you’ll never work a day in your life” comes to mind.

Jack was an active member of the Knights of Columbus and St. Joseph Catholic Church in Libertyville, donating his time and talents for over 60 years. Jack and Dorothy began a Christian Family Movement program in the parish as well as an Adult Education Program in the 1960s. He served as a lector, school board president, coach, general volunteer, and most recently, as the pre-mass greeter—welcoming parishioners with a friendly hello and a wisecrack. He was awarded the Fr. Ken Keipura award in 2014 for the “one man in our community who best represents Fr. Ken’s legacy of friends and faith.”

Jack and Dorothy enjoyed golfing, skiing, and traveling together. They were known for their dancing—at weddings, at the club, and on the road. They loved to find the small, local establishments during their travels across the Caribbean and danced their way through the islands, settling on St. Croix as their winter destination for decades. Wise, generous, friendly, funny, and down-to-earth, he will be deeply missed—but what a great life he led.

Jack is now reunited with his bride in heaven—and he has missed her so much since her passing in 2012. Together, they had six children and instilled the values of family, faith, and friendship. He is survived by his children, John (Kris), Kathleen, Patrick (Raquel), Michael (Beth), Kelly (Suzi), and Maureen (John) Wagner; 17 grandchildren; four great-grandchildren, and many nieces and nephews. He was preceded in death by Dorothy, his parents, his sisters Maralyn and Emmie, and his brother, Bill.

A funeral Mass will be held on Wednesday, Sept. 1, at 10:30 a.m. at St. Joseph Catholic Church, 121 E. Maple, Libertyville. Visitation will be Tuesday, from 4 to 8 p.m. at St. Joseph Church. Entombment will be in Ascension Cemetery, Libertyville. In lieu of flowers, memorials made in Jack’s name to the St. Joseph Food Bank would be greatly appreciated. Funeral arrangements by McMurrough Funeral Chapel (847) 362-2626. Please sign the guestbook at libertyvillefuneralhome.com

To send flowers to the family or plant a tree in memory of John Brennan, please visit Tribute Store
Tuesday
31
August